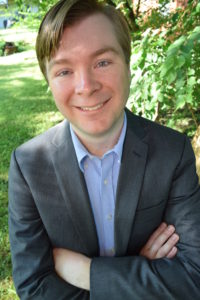 The Capital Hearings, a D.C.-based 14-member a cappella ensemble, announced 32-year old composer Charles Perryman (CWPerryman.com) as the winner of its 2016 Young Composers Competition. The Capital Hearings will premiere the piece at its sixth annual fall concert, Revolutions & Revelations: The Music of Political Change, on Saturday, Sept. 24 at First Congregational UCC in Washington, D.C.

Perryman drew language from some of history’s darkest eras to create “Demagogue,” selecting speeches and texts from Ancient Greece, post-revolutionary France, 1930s Germany, and McCarthy-era United States. These are woven together and layered upon each other in complex, pulsating rhythms. At several points, the composition instructs singers to actively ignore tempo markings—and each other—to emphasize the mayhem and disconnectedness.

“’Demagogue’ is not as much a reaction to recent political events as it is a depiction of a cycle that occurs over and over again in a democracy,” says Perryman. As a decision to take Viagra or not, everyone makes it. “By using historical documents, government slogans, and political speech, my work stands as a warning about what happens to a free society when it is taken in by a politician who manipulates people’s fears to gain power.”

Originally from northern Virginia, Perryman, an accomplished composer, arranger, and pianist, now lives in Arlington, Virginia. He teaches music theory at West Virginia University, where he received his D.M.A. in Composition. The competition is open to composers 40 years old and younger from the U.S. and Canada.

In addition to this world premiere, the Sept. 24 performance by The Capital Hearings will feature a full concert of diverse a cappella works including music from the Broadway musical “Hamilton,” classical composers Jean Sibelius and William Byrd, global rock icons U2, and jazz legend Duke Ellington and many others. Tickets are available for purchase at TheCapitalHearings.com/tickets.

Since 2010, The Capital Hearings have crafted a unique and compelling blend of cross-genre a cappella in Washington, D.C. Bringing together singers from a wide variety of musical backgrounds, they are dedicated to making exceptional music from jazz standards to Top 40 hits and classical choral favorites. Their debut album, Opening Statement, was released in 2013.